La means high, as in transcendent realization—Ma means maternal compassion, like a mother’s for her only child. In the unity of realization and compassion, a lama can benefit others. 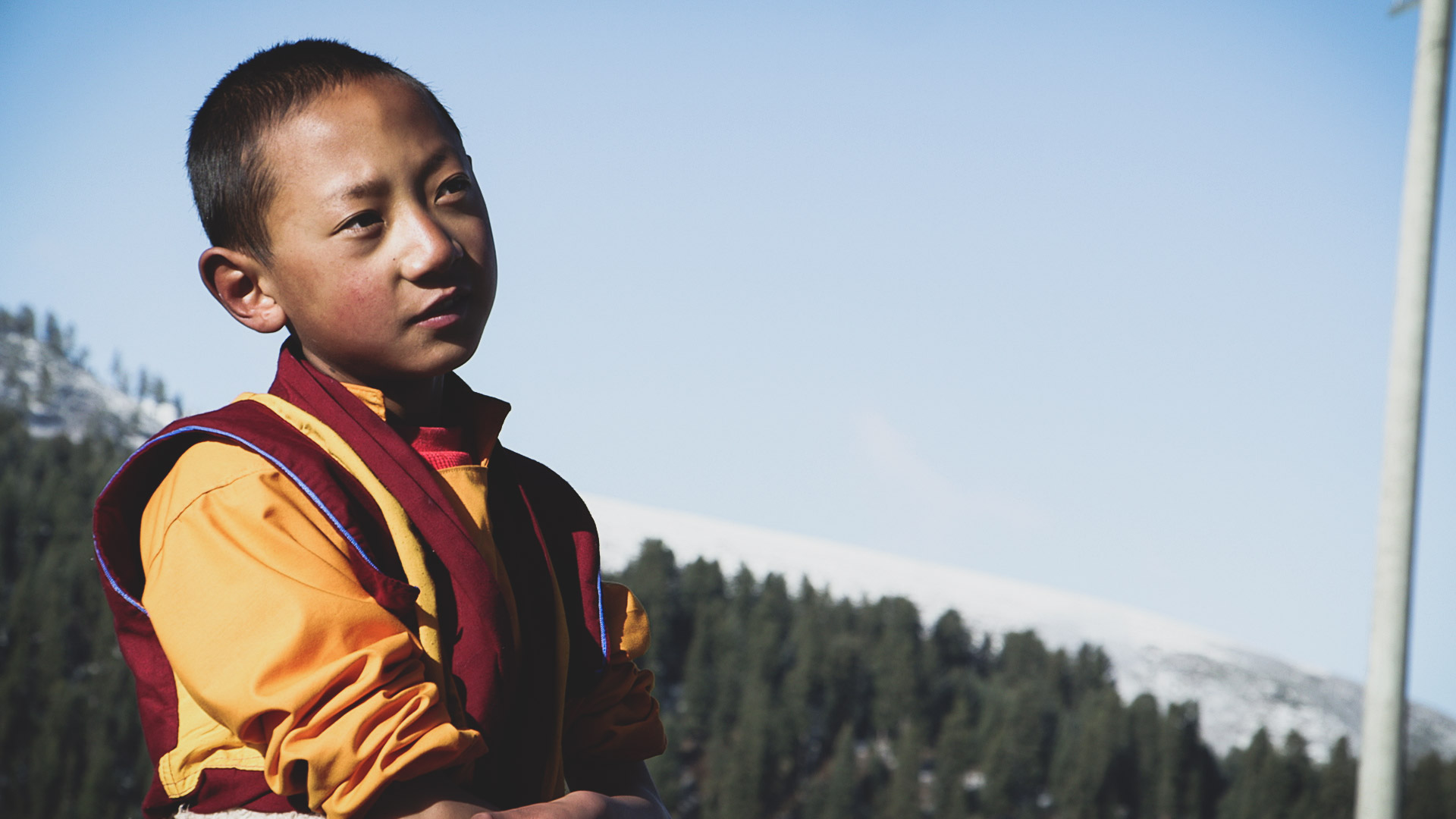 His Eminence Chagdud Tulku Rinpoche was born in eastern Tibet (Kham) in 1930. Recognized at age four as a tulku (incarnation of a meditation master), he received rigorous training and deepened his studies in extensive retreats. He had a special affinity for the sacred arts and Tibetan medicine and was famous for his wonderful singing voice.

In 1959, he escaped the Communist occupation of Tibet and lived in exile in refugee communities in India and Nepal until settling in the United States in 1979. At the request of his Western students, he established the Chagdud Gonpa Foundation, a successful network of centers of the Nyingma lineage of Vajrayana Buddhism. In 1994, Rinpoche moved to Brazil, established Chagdud Gonpa Brasil and began construction of its main center, Khadro Ling, in Rio Grande do Sul. When he died in 2002, he had established more than twenty centers in Brazil, Uruguay and Chile.

As he constantly traveled and taught, radiating enthusiasm and compassion, he became the lama in the hearts of hundreds of students and was a profound inspiration to thousands of others. When asked why, at the age of sixty-four, he moved to South America instead of staying comfortably in the United States, he replied: “I understood the faith of Brazilians and their interest in Buddhism and I wanted to teach them”.

Rinpoche's wife, Chagdud Khadro, is the Spiritual Director of his centers in South America. His son, Tromge Jigme Rinpoche, trains students in the highest meditation of Dzogchen and is the vajra master of many great ceremonies and initiations at Chagdud centers Gonpa in North and South America. Chagdud Rinpoche also had a daughter, Dhawa Lamo, who lives and practices in Boulder, Colorado.

Now, in a full cycle, Chagdud Rinpoche's tulku has been recognized by Khenpo Ngagchung in Tibet. Known as Chagdud Yangsi, he is the focus of the prayers and deep aspirations of sanga members around the world.

The moment our hearts are inclined to compassion for all beings, our motivation expands toward the all-encompassing motivation of a bodhisattva.” 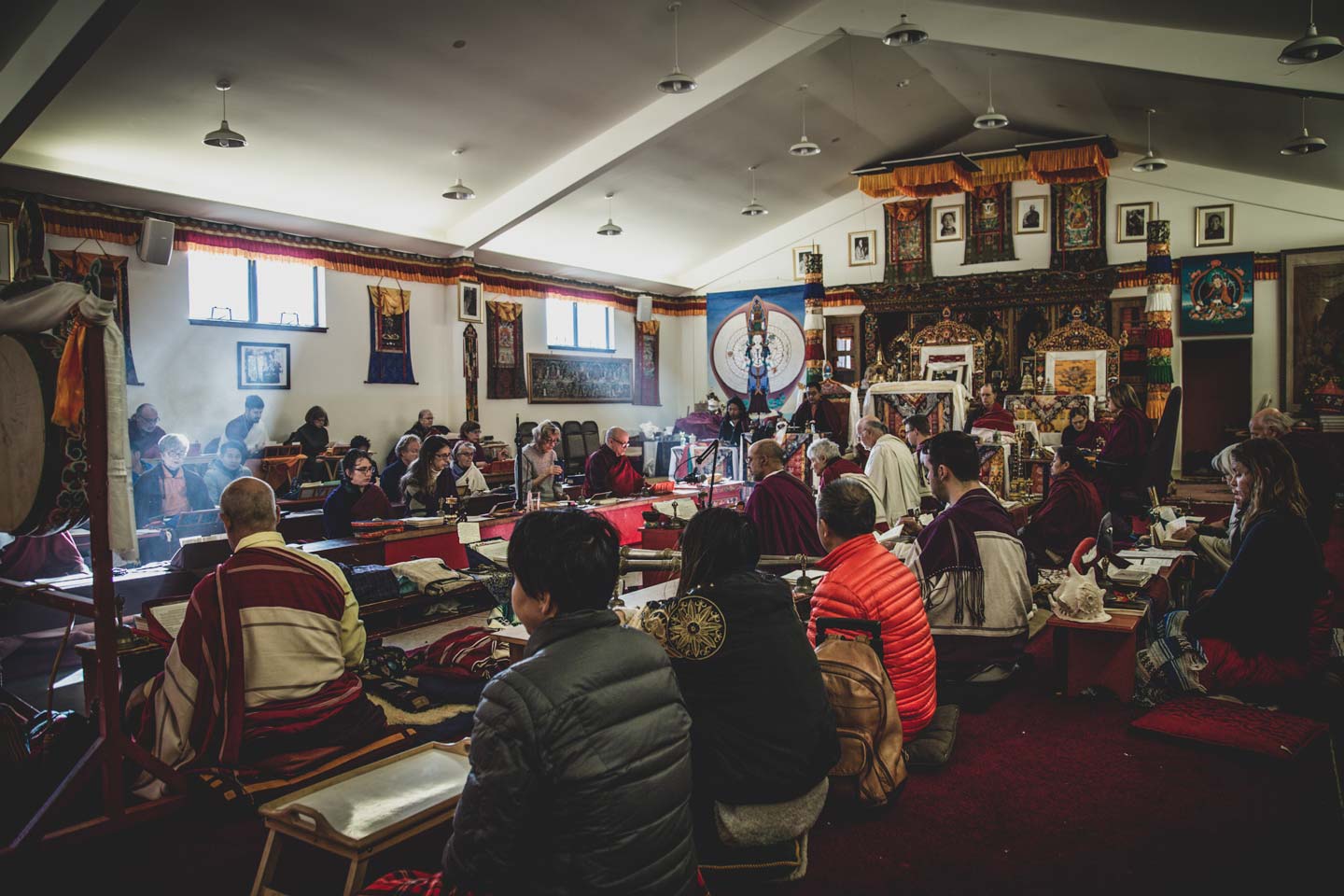 Tromge Jigme Rinpoche is the resident teacher of Ati Ling. The son of the late master His Eminence Chagdud Tulku Rinpoche, at a young age Jigme Rinpoche was recognized by H.E. Chokling Rinpoche as his previous life’s son Tsewang Norbu, who was a reincarnation of Yudra Nyingpo, one of Guru Rinpoche’s twenty-five disciples, and an emanation of Chenrezig.

Rinpoche was born in 1965 in Orissa, India, where he had the good fortune to receive a traditional Buddhist education. He has had extensive training in the teachings and practices of the Nyingma tradition of Tibetan Vajrayana Buddhism and has studied with many great masters of our time including H.H. Dudjom Rinpoche, H.H. Dilgo Khyentse Rinpoche and H.H. Jigme Phuntsok Rinpoche. He also studied philosophy with Khetsun Sangpo Rinpoche and at the philosophy school of His Holiness Penor Rinpoche, late head of the Nyingma school.

Rinpoche emigrated to the United States in 1988. After completing the traditional three-year retreat under the guidance of his father, he moved to Ati Ling in 1992 and became its resident lama.

Rinpoche travels throughout North and South America and Asia giving teachings and counseling people with his gentle wisdom and warmth. As authorized by his teacher the Dzogchen master Khenpo Ngagchung of eastern Tibet, and at Chagdud Khadro’s request, Jigme Rinpoche now offers Dzogchen teachings in the context of the annual retreats that Chagdud Rinpoche initiated in Brazil.

Besides the monasteries in Tibet and Nepal for which he is jointly responsible, he is the founder and director of the Padmasambhava Peace Institute, and director of the Mahakaruna Foundation, an international charitable organization founded by H.E. Chagdud Tulku Rinpoche that offers assistance to the old, sick and impoverished in various parts of Asia, and also works to preserve Tibetan Buddhist culture. 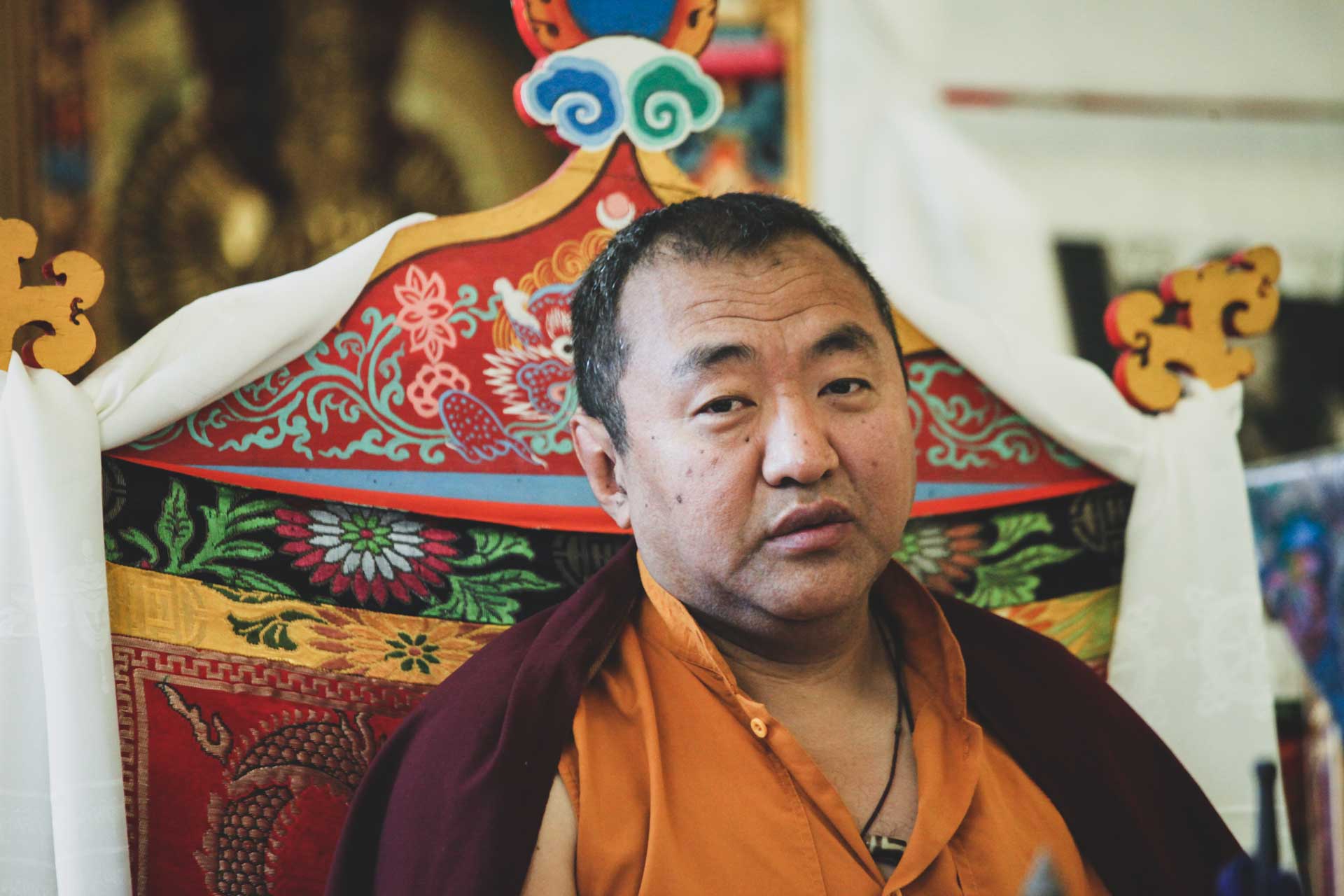 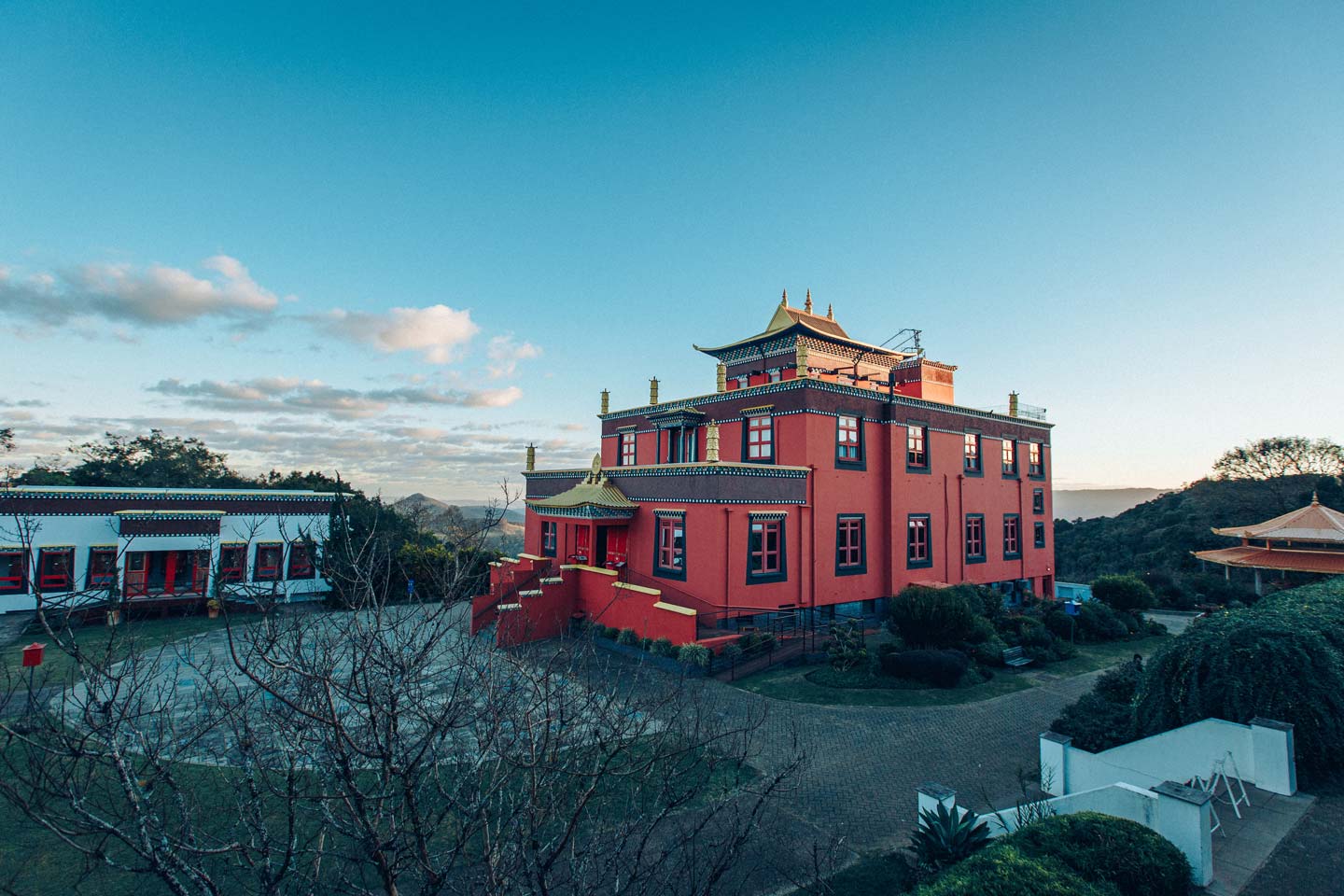 At the time of her ordination as a lama in 1997, Rinpoche invested her as the future Spiritual Director of Chagdud Gonpa Brasil. Since Rinpoche's Parinirvana in 2002, Chagdud Khadro has focused on maintaining the high caliber of Vajrayana training he had established.

During her time with Rinpoche, Khadro received constant training from him both in organizing dharma activities and in the teachings and practice of Vajrayana. She was among the collaborators for his autobiography Lord of the Dance and with his guidance, she compiled commentaries of his teachings on the Dudjom Tersar Ngondro, the Longsal Nyingpo Phowa, and the concise version of Apong Terton's Red Tara.

Formerly the managing editor of Padma Publishing in the United States, Khadro has edited many translations of Tibetan works. Today Chagdud Khadro is tireless in cultivating the seeds planted by H.E. Chagdud Tulku Rinpoche: the construction of Padmasambhava’s Pureland, translation and publishing of texts in Portuguese and Spanish, projects related to education and to death and dying. 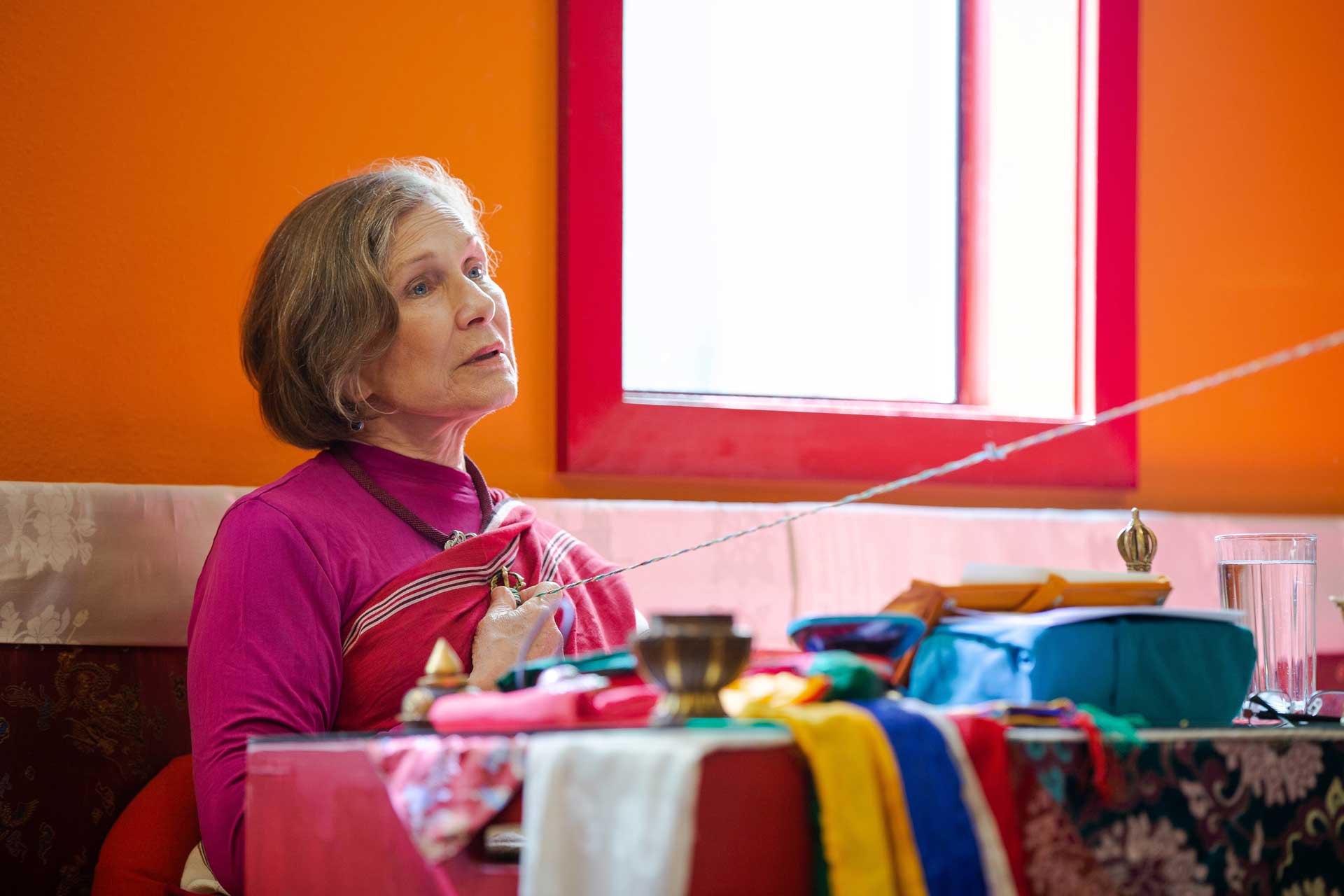 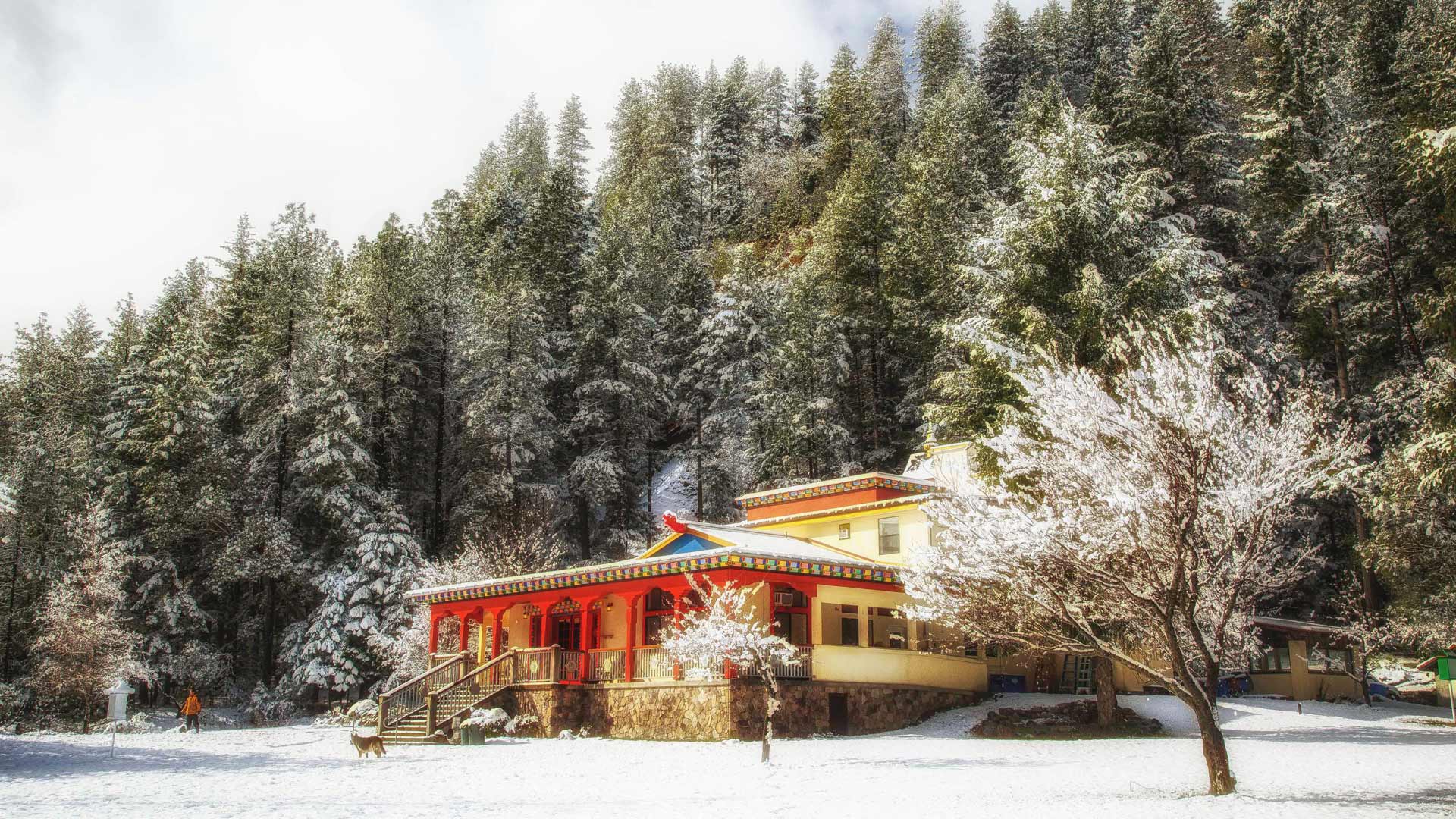 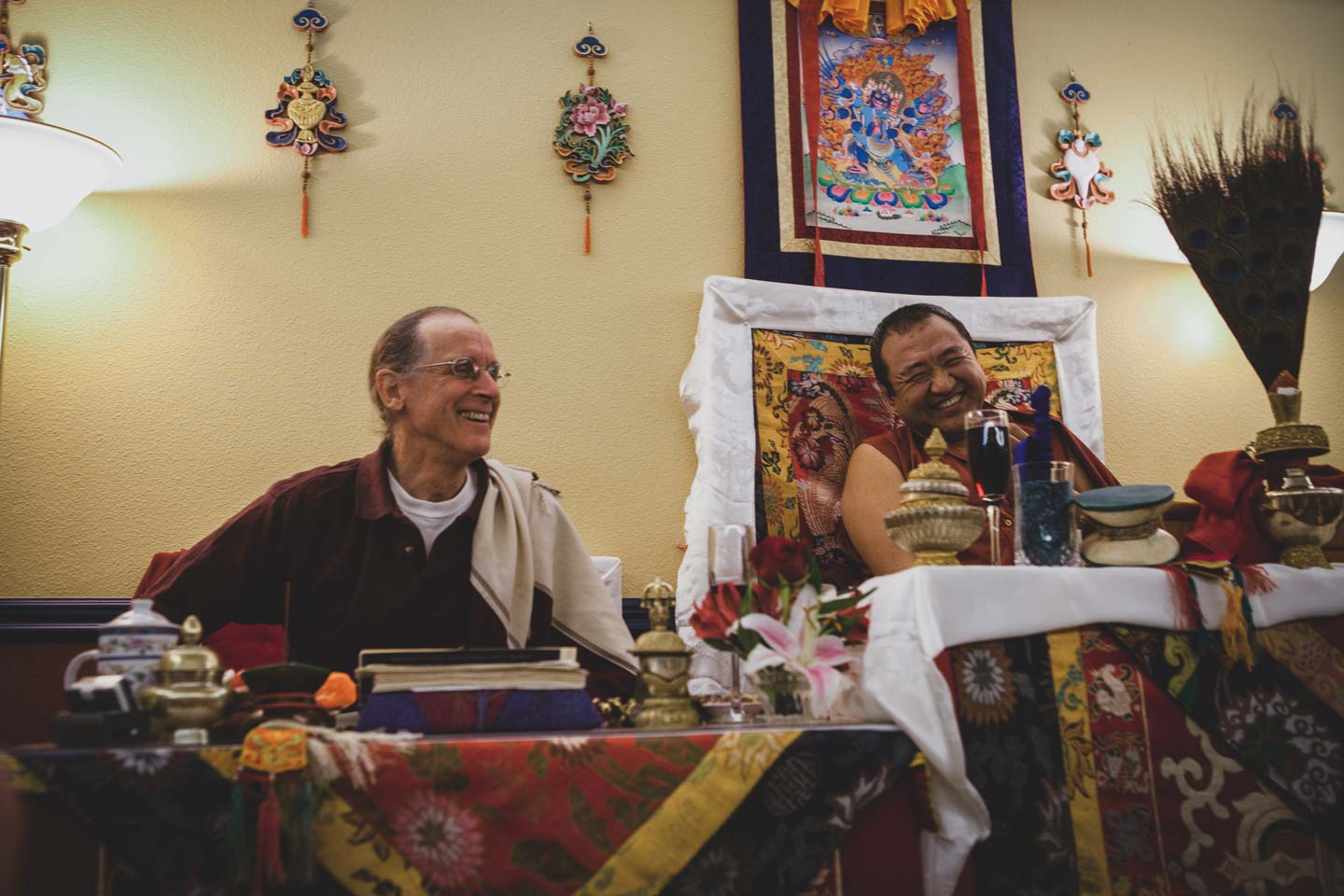 Lama Padma Yontan Gyatso (Richard Baldwin) began his formal Buddhist training in India in 1970 with the outstanding meditation master, the late Venerable Kalu Rinpoche. Returning to the U.S., he entered the Buddhist Studies Program at the University of Washington.  At this time he also received many teachings at the feet of the late Venerable Dezhung Rinpoche, a master of all lineages. He received his degree in 1974 and subsequently embarked on a number of meditation retreats. In 1982 he became a student of H.E. Chagdud Tulku Rinpoche. In 1996, Chagdud Rinpoche ordained him as a lama and appointed him as the teacher at Chagdud Gonpa Amrita, Seattle.

Lama Padma teaches and practices with meditation and study groups throughout the Northwest, including several Buddhist groups in state prisons.

Having translated from Tibetan the extensive Tromge Chenrezig text, in 2004 Lama Padma deepened his connection with the Chenrezig practice when he traveled to Tibet and met with the terton Tromge Dechhen Kyabje Wangpo, who acknowledged him as a lineage-holder of the practice. After completing extensive retreats over several years as directed by Tromge Dechhen Rinpoche, Lama Padma was authorized to offer the empowerment for the Tromge Chenrezig.

Additionally, Lama Padma is coordinating the development of Chokdrup Ling, a 320 acre retreat center in the Four Corners area of Southwest Colorado. 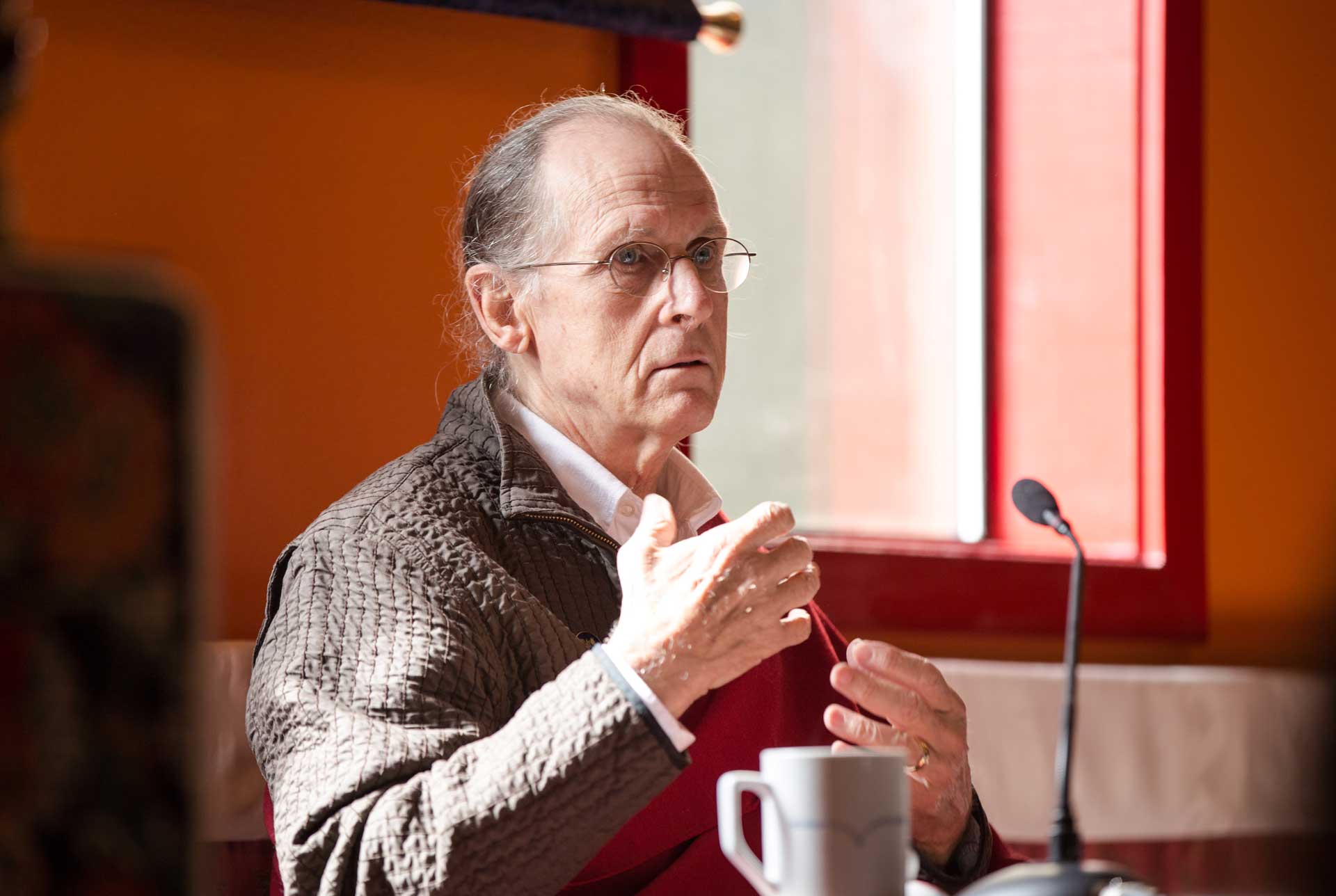 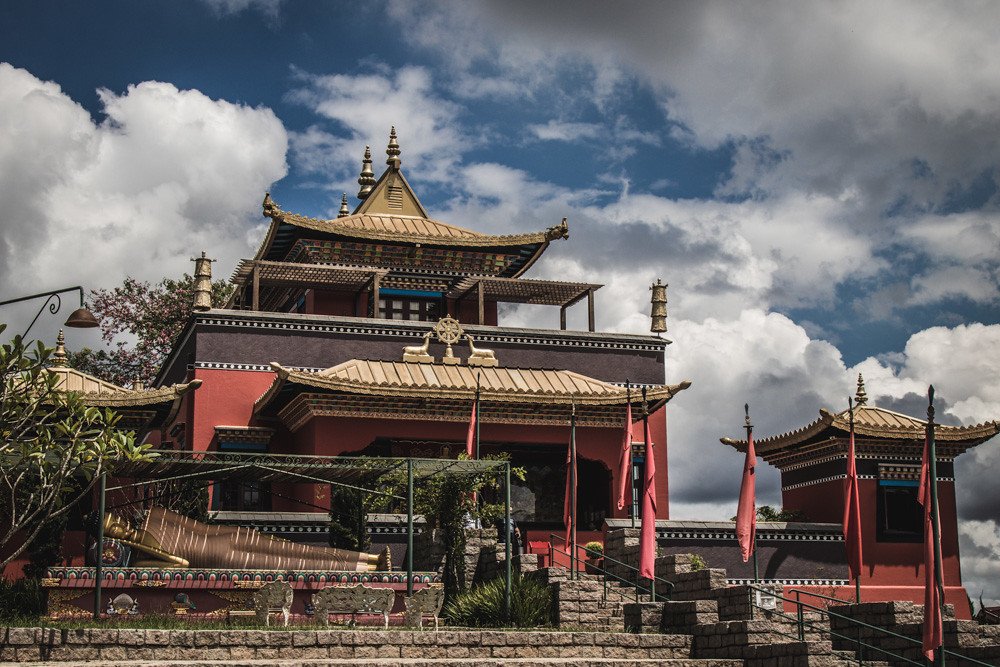 Born in the US, Lama Tsering has served H.E. Chagdud Tulku Rinpoche as his translator for more than 11 years. After completing a three year retreat in 1995, she was ordained as a lama and recognized by Rinpoche as a holder of the Red Tara lineage, authorized to give teachings and empowerments. In the same year she was invited to teach in Brazil where she moved to shortly after.

Her warm and humorous style reflects Rinpoche's own humor and empathy, with focus on cultivating compassion, training the mind, and applying the dharma in daily life. She teaches and conducts retreats in many cities across Brazil, Chile, New Zealand and Australia as well as returning each year to fulfill the requests of her students in North America.

Lama Tsering is the resident lama and director of Chagdud Gonpa Odsal Ling in São Paulo and is currently coordinating the construction of Odsal Ling's temple in Cotia along with her husband Lama Padma Norbu. 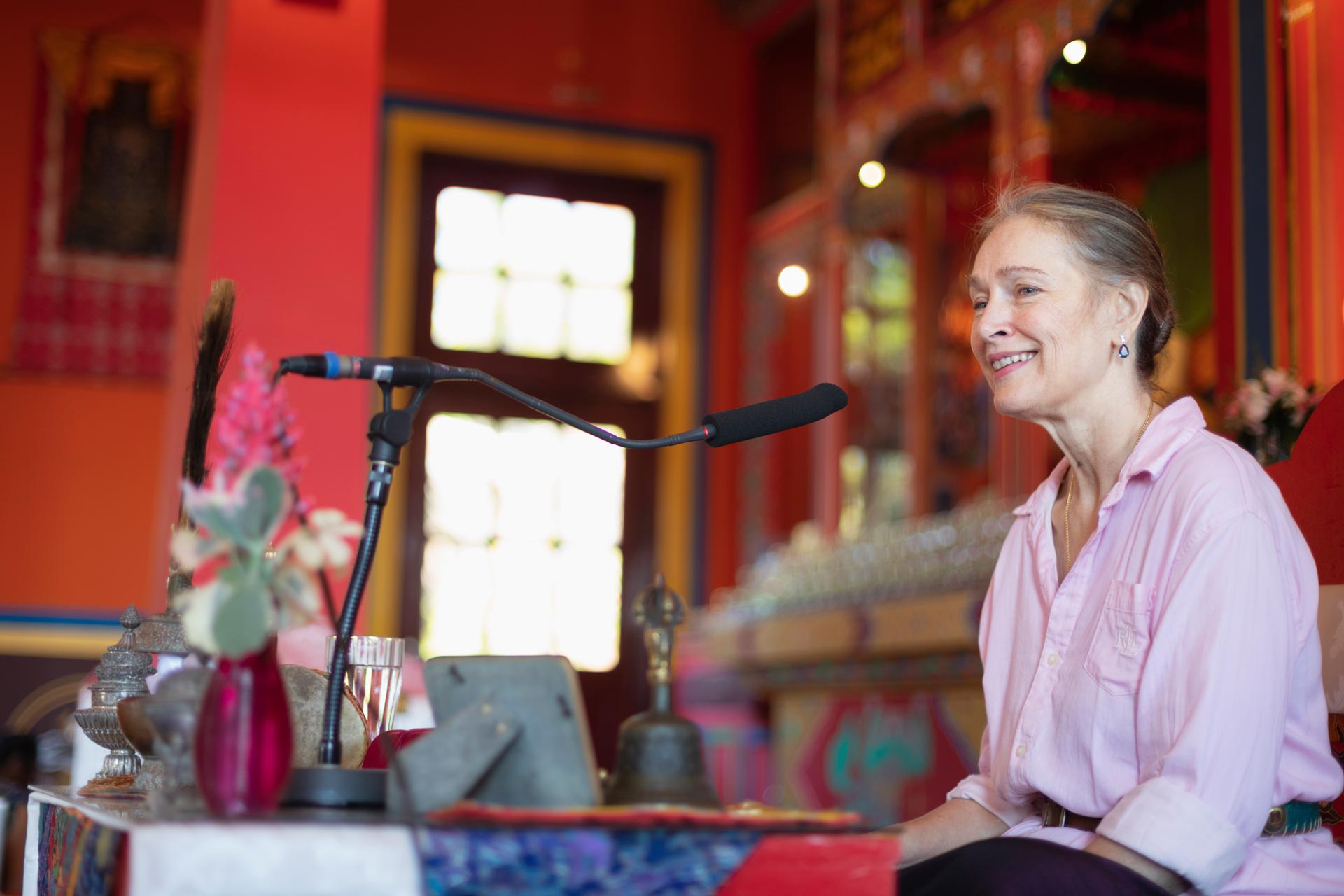 Born in Denver, U.S.A. in 1948, Lama Norbu (David Everest) was educated and worked as an electrical engineer during his early years.

He met his teacher, H.E. Chagdud Tulku Rinpoche in 1980 and, after completing the cycle of Dzogchen teachings and retreats, was ordained a lama in the Vajrayana tradition in 1995.

For twenty years he worked with his teacher to carry out various projects such as the construction of retreat centers and the Khadro Ling temple in Southern Brazil. He later completed a solitary two year retreat under Rinpoche's guidance, and was encouraged to give teachings and share his experience in integrating Buddhist principles with the challenges of daily life.

He and his wife, Lama Tsering Everest, currently live in São Paulo, Brazil, where he divides his time between the construction of the Odsal Ling Temple, various children's projects, and teaching. 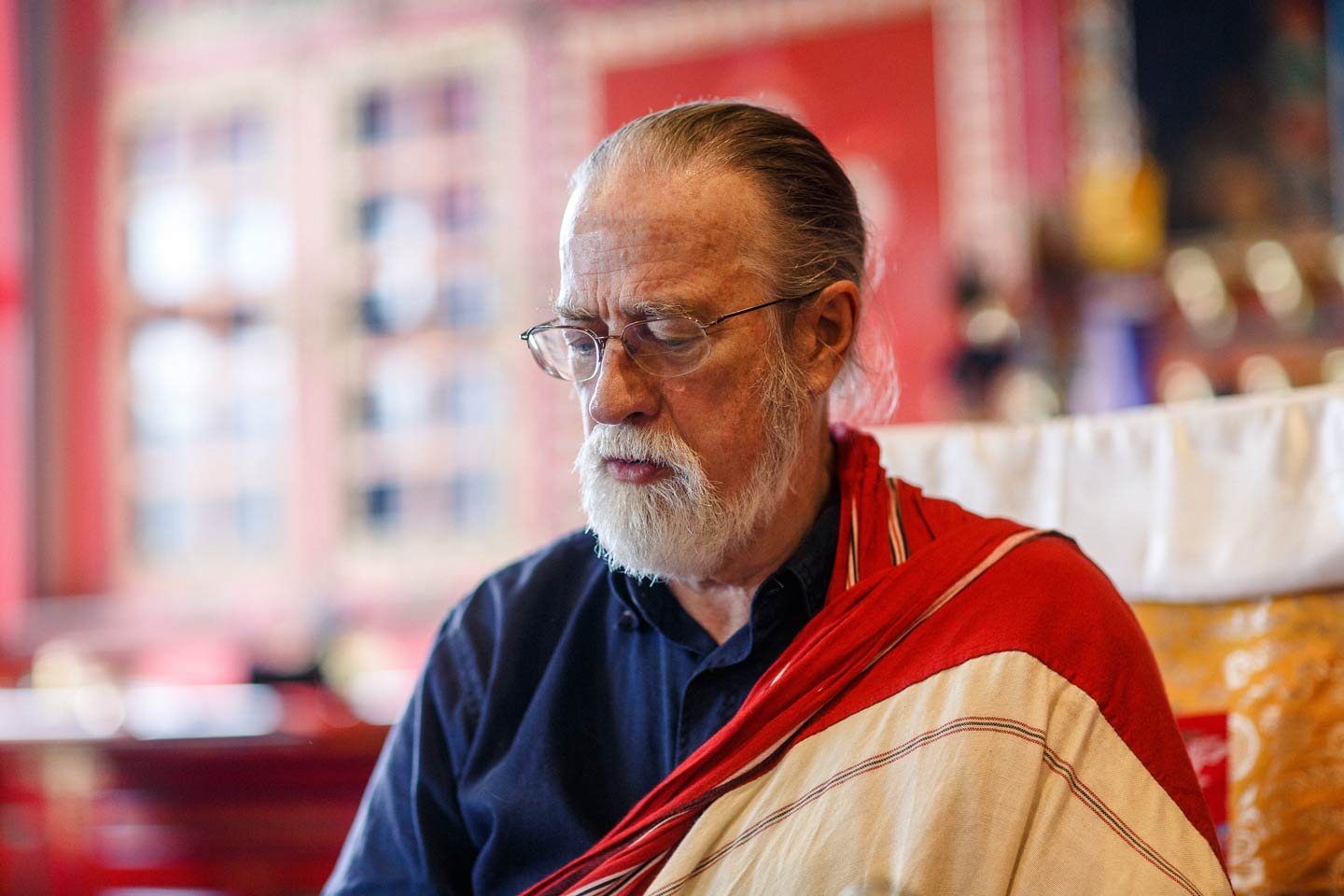 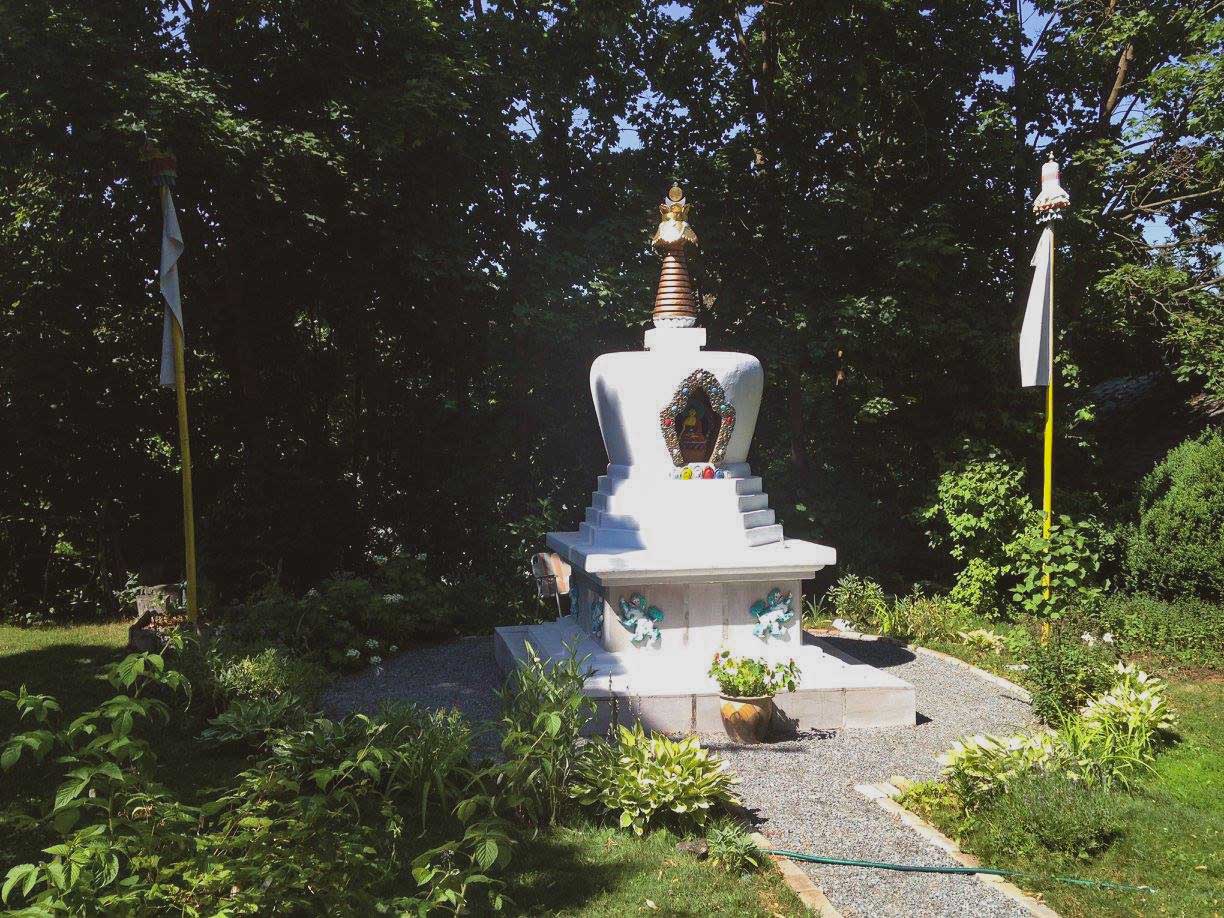 Lama Yeshe Zangmo, known as Lama Inge  (Inge Sandvoss) was born in Germany in 1939 and moved to the United States in 1958. In December 1980, she moved to Ashland, Oregon and stayed at Gyatrul Rinpoche’s center and received Vajrakilaya empowerment and the complete teachings on generating the deity. From Chagdud Rinpoche, Inge received Red Tara and T’hroma empowerments as well as empowerments for other deities practiced by Chagdud Gonpa. She also received teachings on the Great Perfection from Chagdud Rinpoche.

As resident lama of Padma Ling in Spokane, WA, Lama Inge Zangmo maintains a daily practice schedule, teaches twice a week and helps with the prison program. She also travels and teaches at various dharma centers in the United States and has taught in Germany and Nepal. 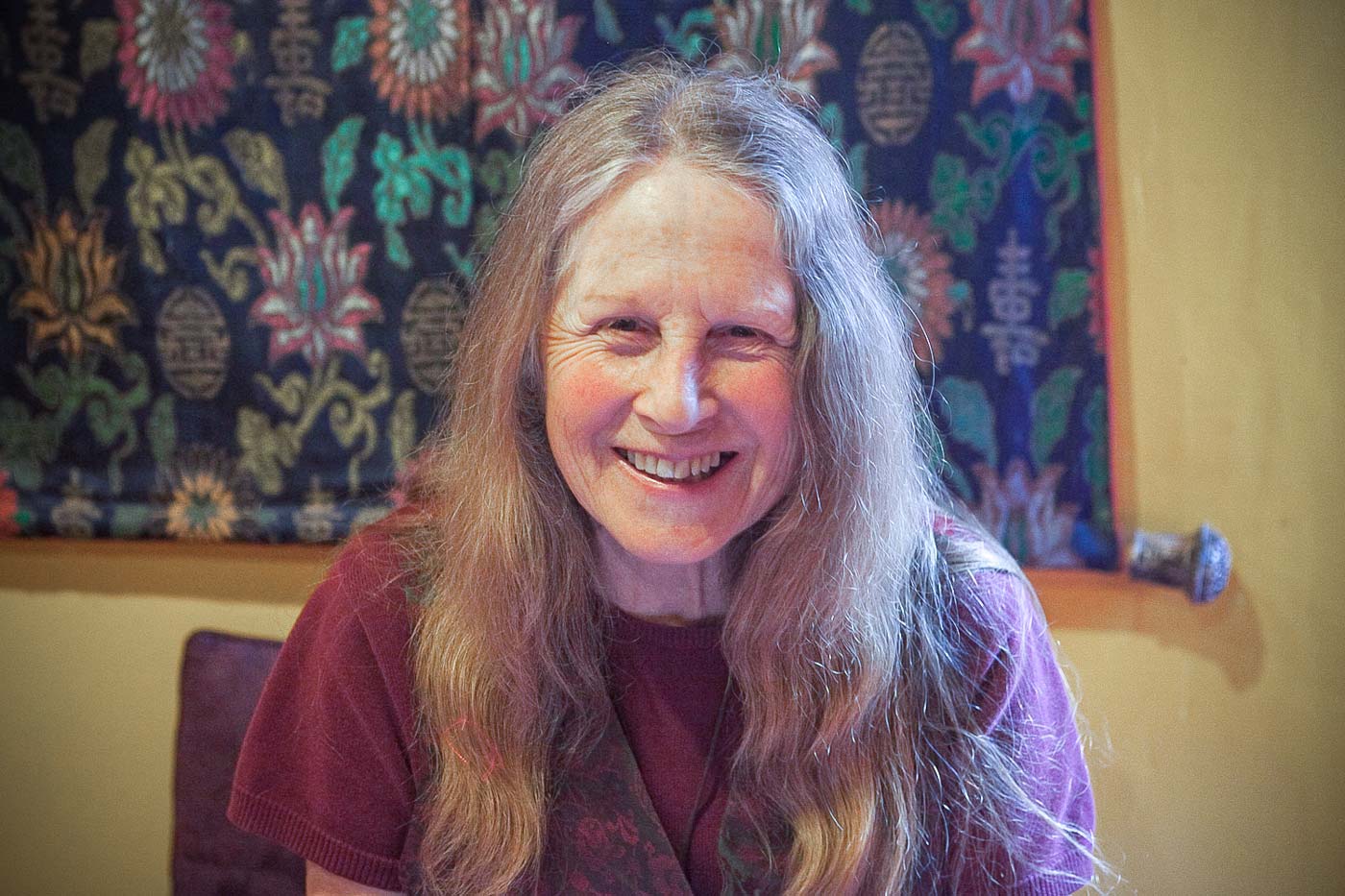 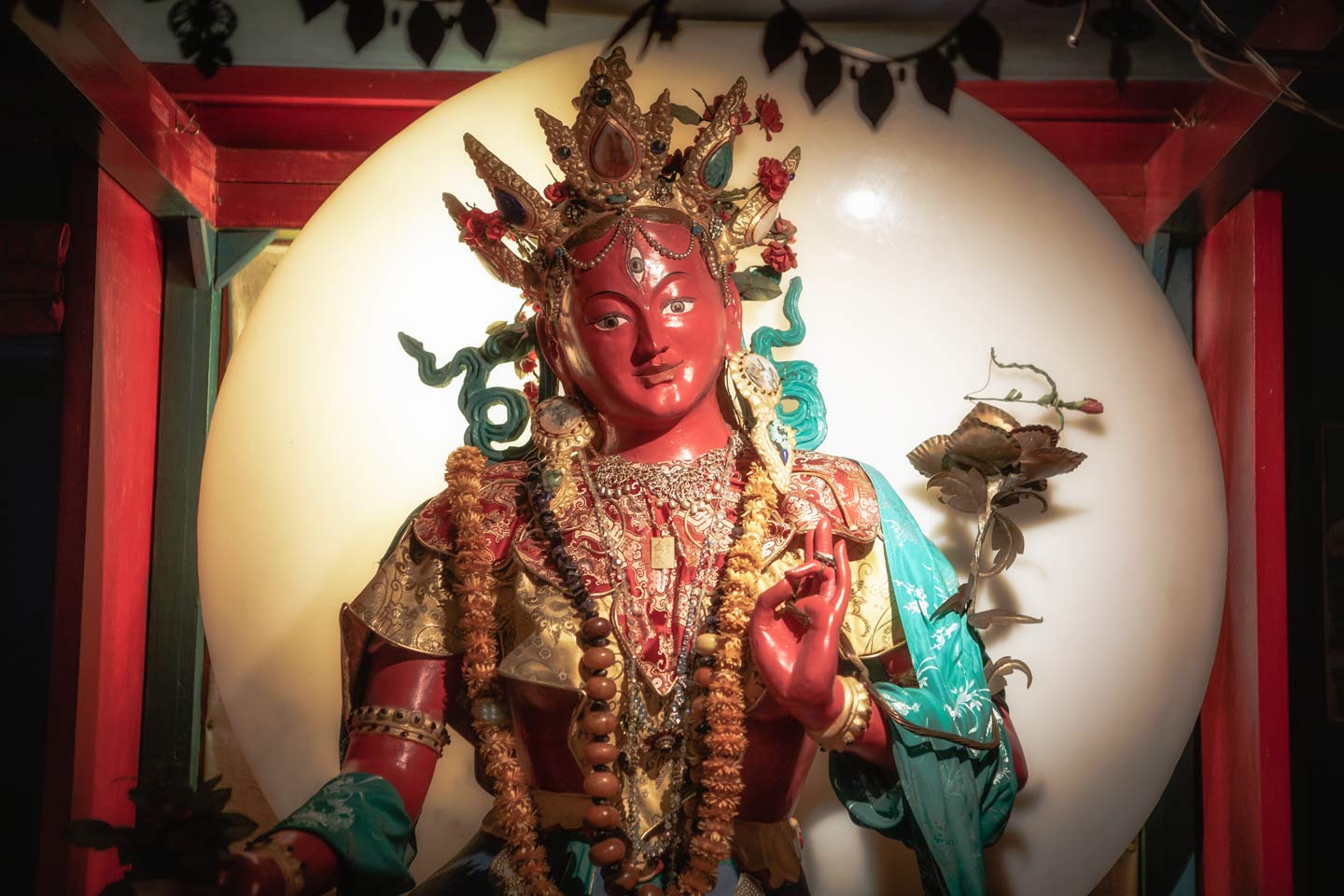 Lama Padma Dorje (Jeffrey Miller) became H. E. Chagdud Tulku Rinpoche’s close student in early 1980s, when Rinpoche lived in Oregon. They collaborated on many projects and Lama Dorje attended many Dzogchen retreats and drubchens. One of the foremost Chagdud Gonpa practitioners of sacred lama dances, he has trained many of the current dancers.

For a number of years he was an active member of the Padma Publishing Translation Committee and he devoted his resources to the translation of Longchenpa’s Seven Treasuries, whose publication was one of Chagdud Rinpoche’s strongest aspirations. In 1996 Rinpoche ordained Lama Dorje. Presently he lives in Cottage Grove, Oregon, where he is the resident lama of Rinpoche’s first center, Dechen Ling. 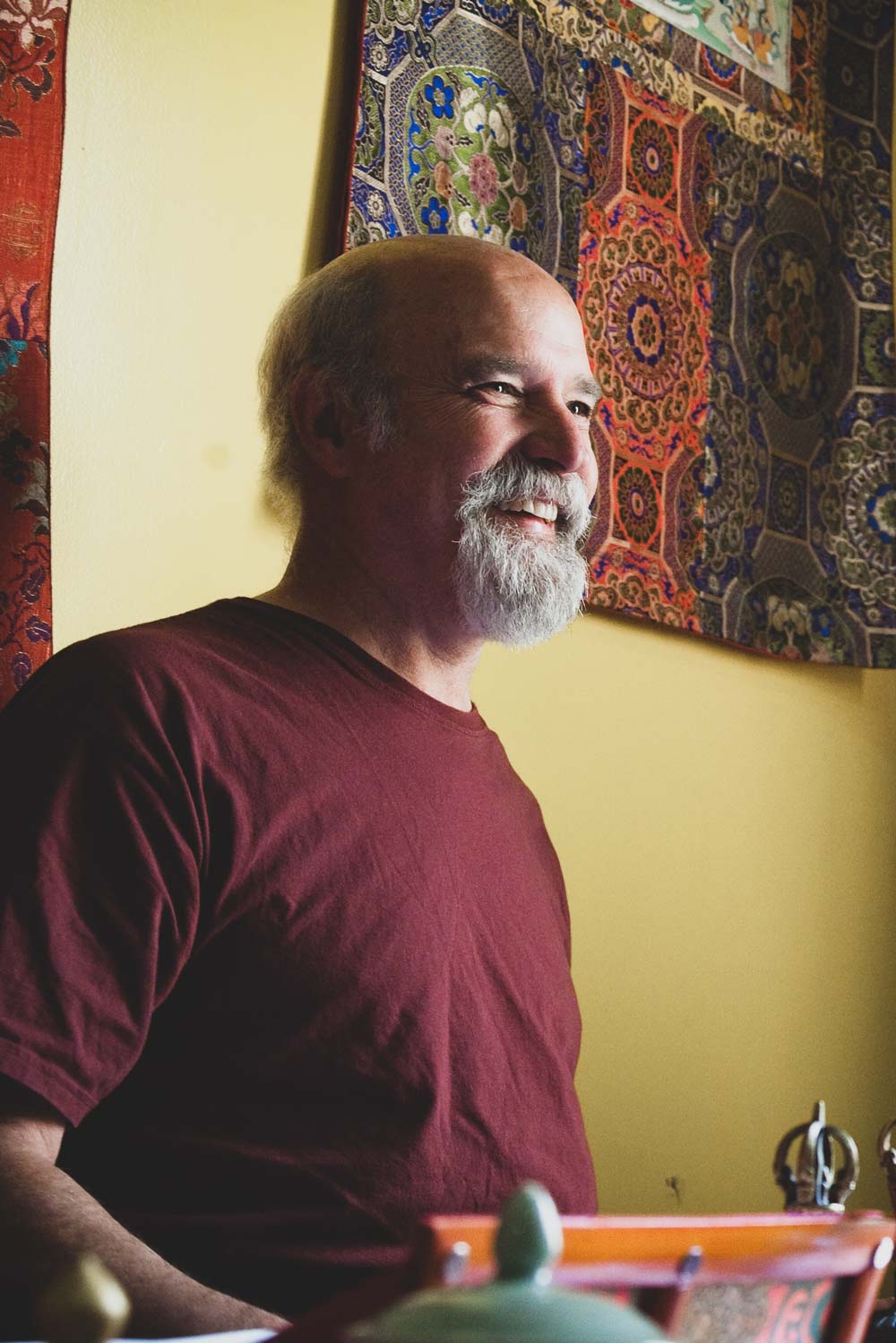 Lama Jamie has maintained a retreat land and practice group (Gatsal Ling) at Williams, Oregon since shortly after he first met Chagdud Rinpoche in Eugene and Cottage Grove.  He also teaches and leads practices at other centers, including Cottage Grove and Iron Knot. 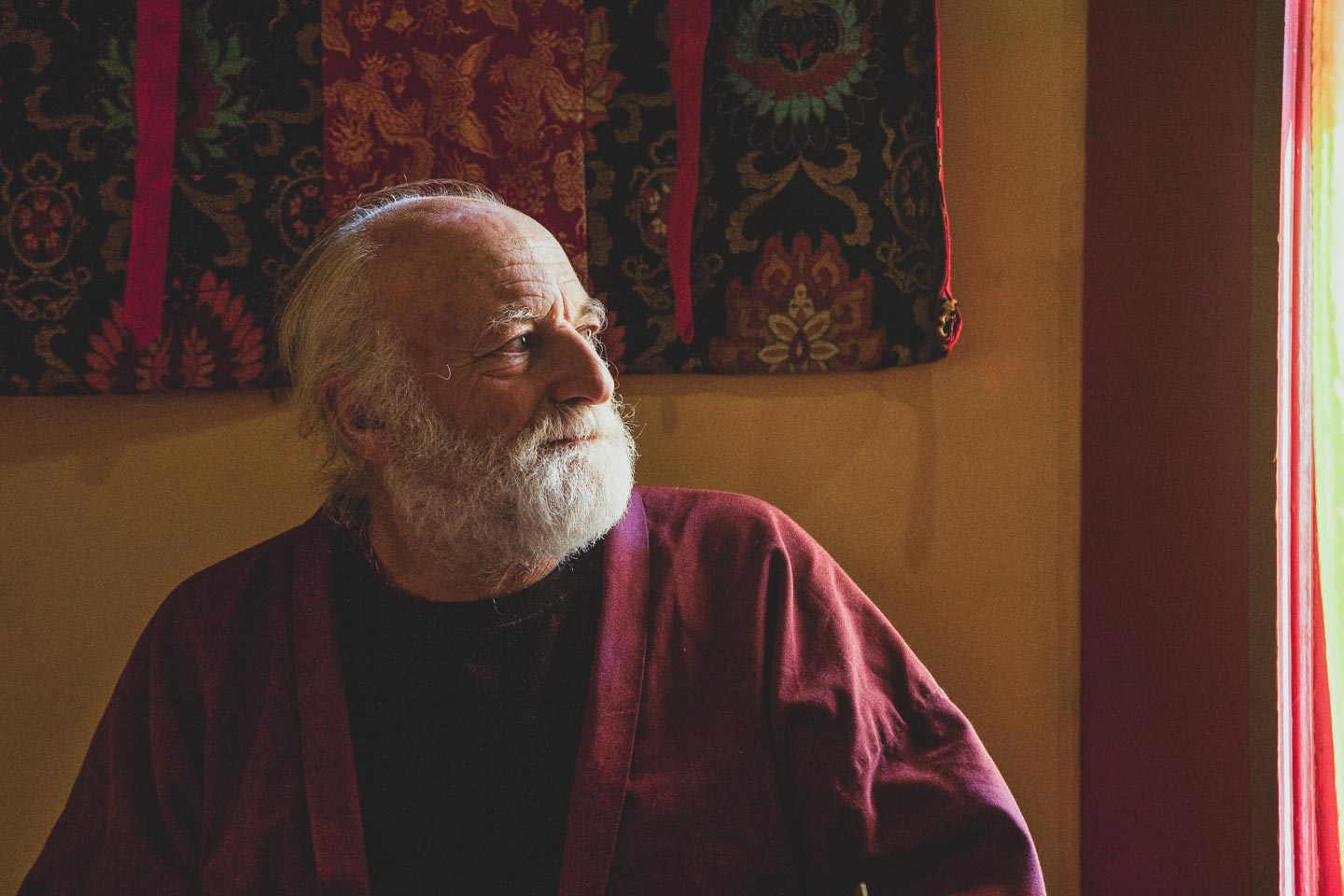 Ordained by H.E. Chagdud Tulku Rinpoche in 2002, Lama Sherab Drolma has become a respected teacher with obvious depth of guru yoga and spiritual discipline. She served Rinpoche as his translator, personal attendant, and as an administrator of his dharma activities.

She is a resident lama of Khadro Ling, and travels throughout Brazil supporting practitioners through teaching, spiritual counseling, and practice. She is also an extraordinary lama dancer who authentically expresses the meaning of meditation through movement. 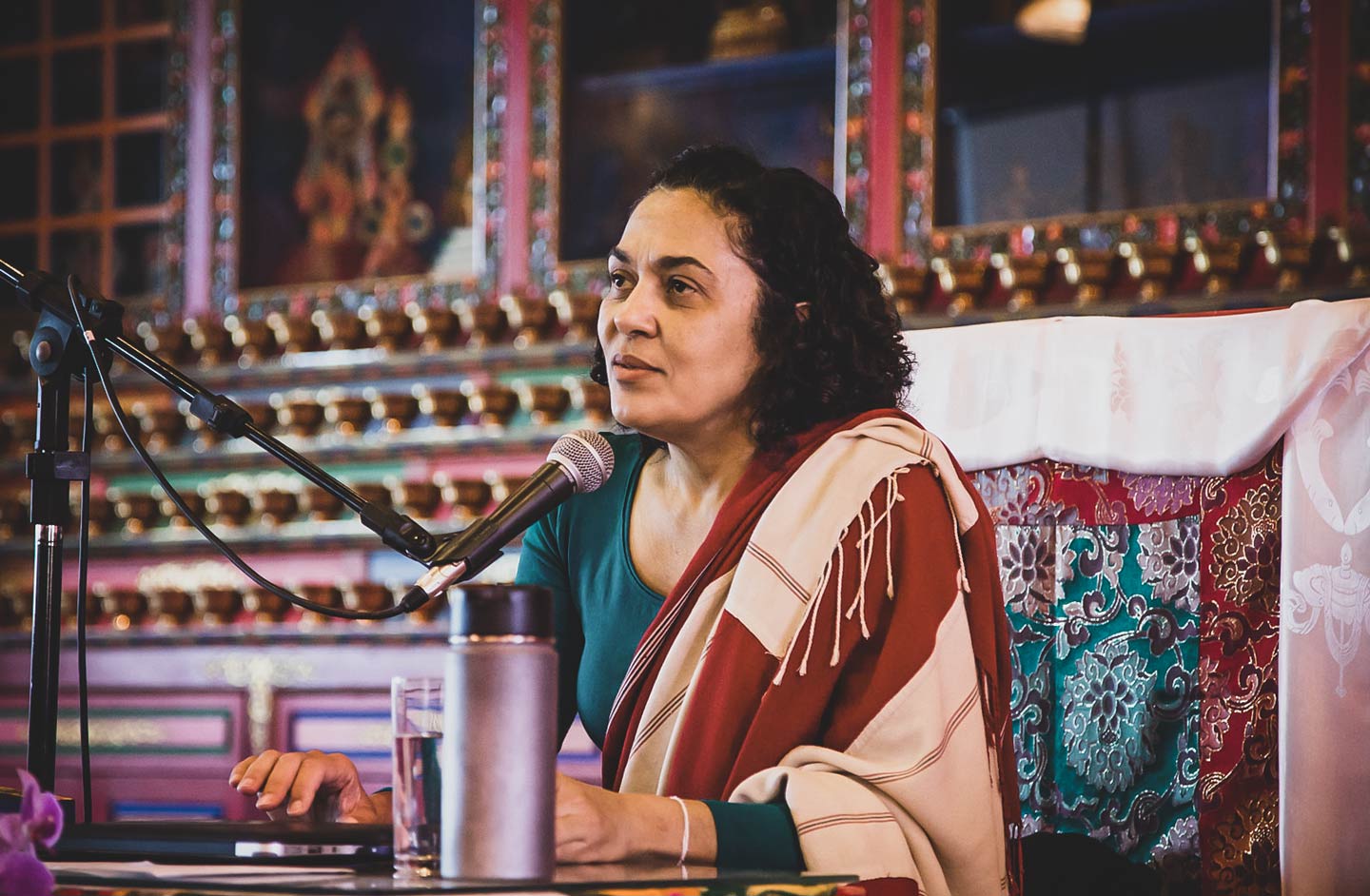 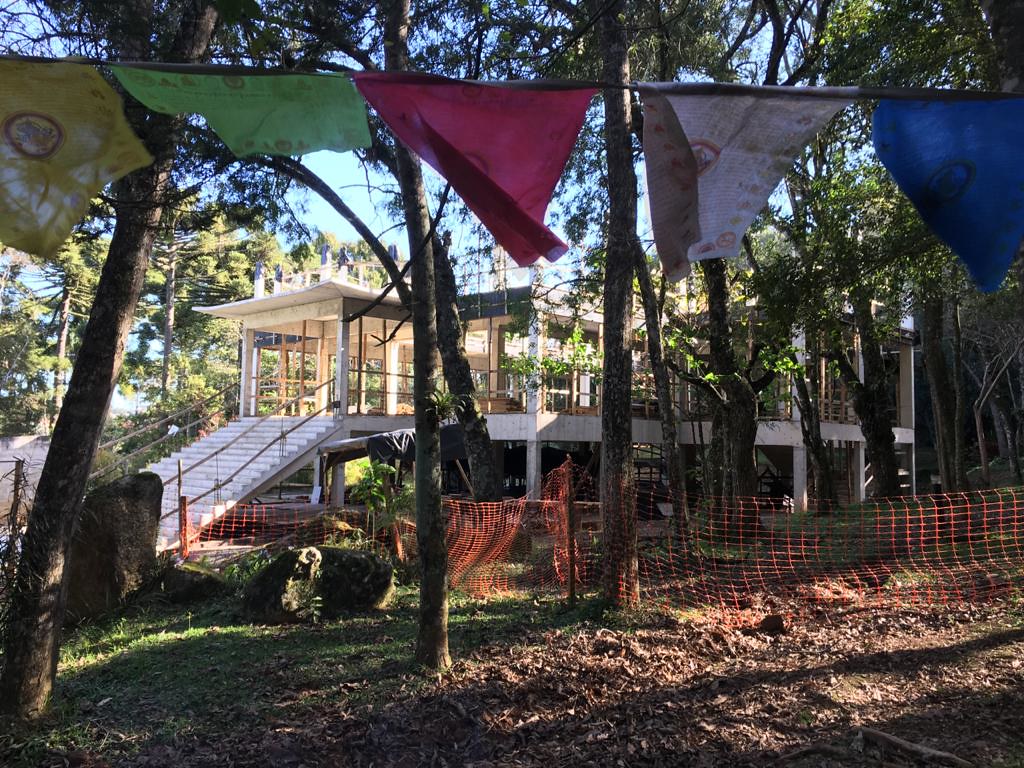 Lama Yeshe has been a student of H.E. Chagdud Tulku Rinpoche’s since 1990. After meeting Rinpoche in Brazil, she traveled to Rigdzin Ling in California, where she participated in several important retreats and quickly mastered excellent English.

She returned to Brazil with Rinpoche in late 1994, serving as a translator to both Rinpoche and Chagdud Khadro.

During this time in Brazil she also became a fine performer of the traditional sacred dances of Vajrayana Buddhism. Ordained in 2002, at Rinpoche’s request she interrupted an extended personal retreat to serve, along with her husband, Lama Rigdzin, as resident lama at Chagdud Dorje Ling in Curitiba, Paraná. 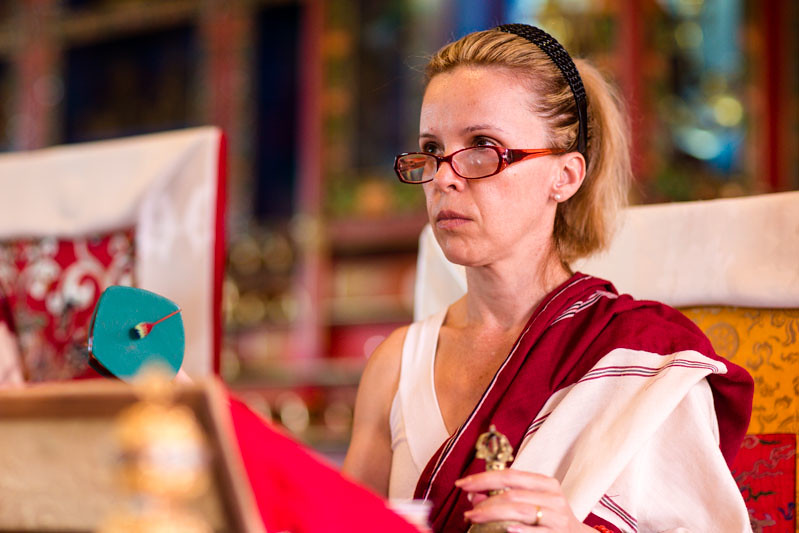 Lama Rigdzin has been a student of H.E. Chagdud Tulku Rinpoche’s since 1992, first at Rigdzin Ling, in California, then, since 1995, in Brazil. During that time he has attended many teachings and retreats, and served Rinpoche in various capacities.

His construction and craftsman abilities were extremely valuable during the construction of the temple at Khadro Ling, and as a fine artist, he has worked with Rinpoche on artistic projects, most notably a large statue of Akshobhya Buddha. He has also served as chöpon (shrine master), umze (chant master), lama dancer, and as Rinpoche’s translator.

His qualities were officially recognized by Rinpoche in an ordination as lama in 2002. Lama Rigdzin and his wife, Lama Yeshe, were requested to be resident lamas at Chagdud Dorje Ling in Curitiba, Paraná. 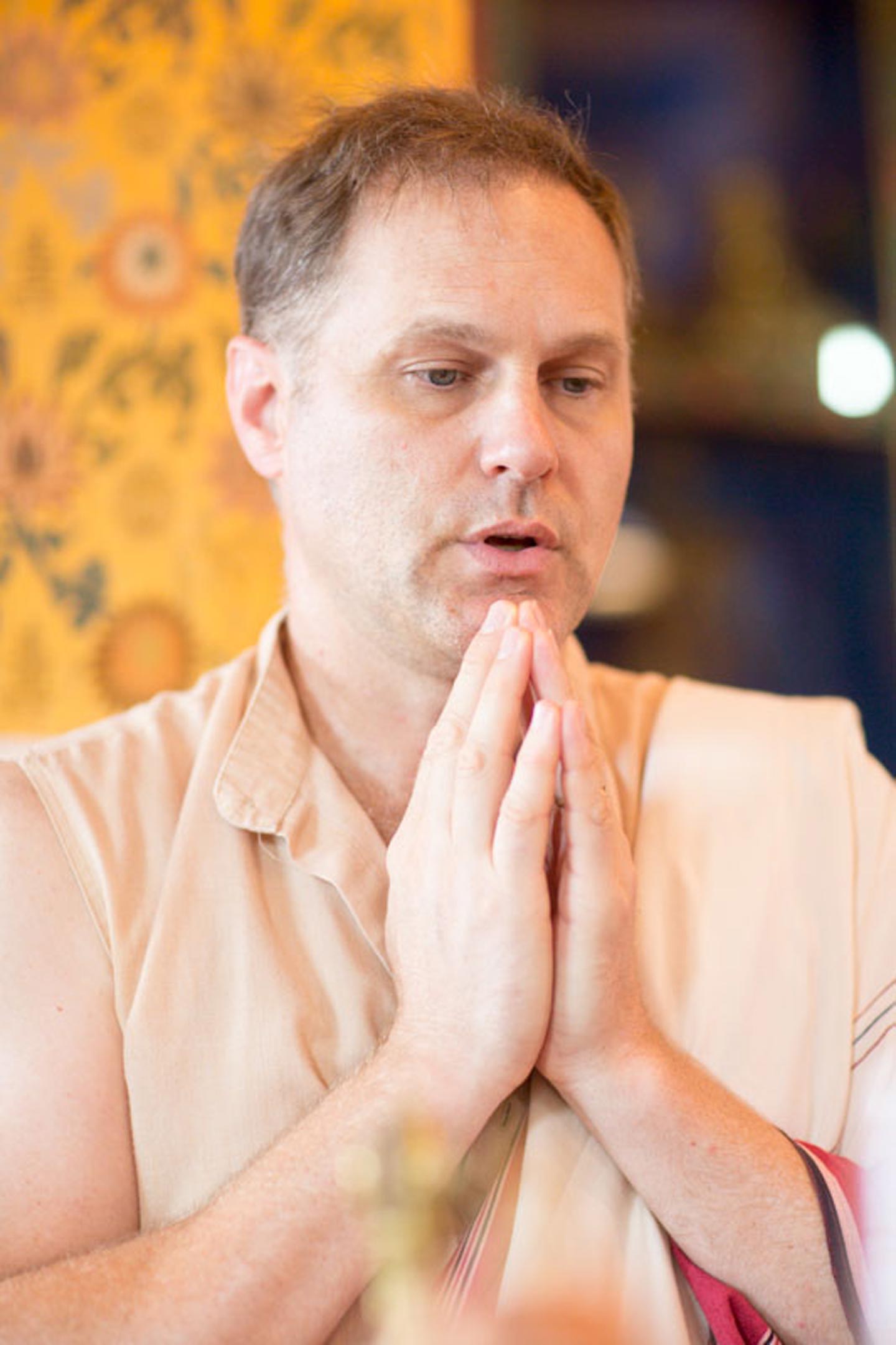 The root masters and teachers of Chagdud Tulku Rinpoche.

An international network of Buddhist centers whose origin is Chagdud Gonpa in Tibet.

Chagdud Gonpa centers and practice groups located across the country.